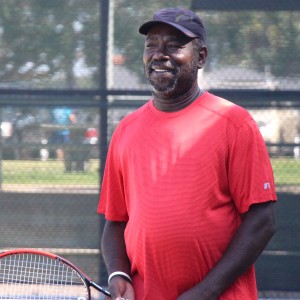 Born and raised in Jefferson City MO, I studied Business Management & Physical Education. While attending Lincoln University in Jefferson City I began playing tennis as a recreational activity.
In 1992 I started volunteering at the Jefferson City YMCA afternoon tennis program for juniors, and attended several coaching workshops. From 1996 until 2001 I served as a volunteer assistant coach at Jefferson City SHS boys tennis and in 1998 I started teaching private and group lessons independently. Between Fall 2002 and Spring 2003 I volunteered as an assistant at Lincoln University in Jefferson City.
I moved to San Diego in 2003 and started working maintenance for Balboa Tennis Club until 2009. During this period I began subbing in at Griffin Tennis Clinics. Since 2010 I have been teaching clinics and private lessons at BTC. My goal when teaching is twofold: that my students remain enthusiastic, energized and curious about learning to play tennis and that they strive to reach their potential as players.