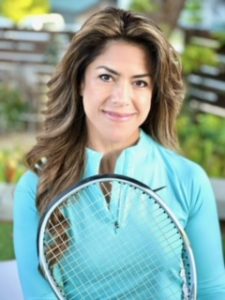 Hi! I’m Coach Carla. I was born and raised in the Philippines. Growing up, I’ve always loved playing different sports with my 6 siblings especially volleyball. But when I was 12, my dad got me one tennis lesson, had me play a tournament, made it to the finals, and I’ve been hooked since!

I took a 7 year break from tennis to raise my daughter Nica and become a social worker. Soon after that, I started playing tournaments and league matches. I’ve reached a national doubles ranking as high as 20 and a national singles ranking of 6.

I’ve played USTA and WTT national tournaments. My love for the game led me to coaching. I coached at Olympian High School. There, I founded Live Love Tennis Club which offered free tennis instruction to all students at OHS as well as hosted tennis tournaments that encouraged fun, competitive play. I’ve led the team to play at the CIFs, representing Metro League for the first time with many first year tennis players. I’ve coached High School World Team Tennis wherein Olympian HS earned Team of the Year and received recognition at Billy Jean King night at WTT Aviators match. Additionally I’ve coached Junior Team Tennis 18U which earned another Team of the Year award. From Olympian High School I got asked to be the assistant coach at Southwestern College.

I have earned my Coach Youth Tennis certification through USPTA and have 11-17 year old Coaching Essentials. Through the years I’ve coached kids of all ages as well adults from all levels. I believe that in addition to coaching strong, consistent tennis fundamentals, creating a fun, respectful environment is key. Listening goes both ways. I look forward to contributing to others’ successes!