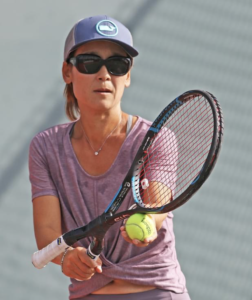 Hiromi was born and raised in Japan, and started to play tennis at the age of six. She started to compete in tennis when she was ten. In 1994, she held the title of “All Japan Mixed Doubles” and competed professionally on the WTA tour with a high ranking of 771 in singles. She is USPTR certified for Adults, kids 10 and under, and 11-17 High Performance. Hiromi has participated in Balboa Leagues alongside many Balboa Members and SDTF tournaments and Cups alongside and with SDTF members. She is a current tournament player and loves to engage with players on the Balboa Tennis Club Challenge Court. She is well known in the San Diego tennis Community.
A few of Hiromi’s Tennis accomplishments
• In 2015 she received the “Women’s Sportsmanship of the year” award from the USTA.
• In 2016 Awarded and Player of the year Award from SDTA and USTA
• National 40s Singles Champion 2016-2021
• 10 National Gold Balls
Hiromi has 3 children, two boys, Jun and Kai, who also enjoy playing tennis and one daughter, Hana, who is just learning. She also has investments in a very successful restaurant business. Hiromi’s passion is not only to play, but also to teach others the fundamentals necessary in order to move to the next level. She is dedicated to helping people of all ages succeed, in both sports and their personal lives. She recognizes how many people helped her growing up to get to where she is. She wants to give back to the community as so many people did for her.