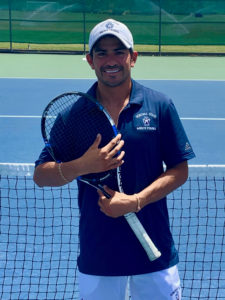 “Being a tennis coach is not only about teaching somebody how to play tennis; being a tennis coach is much more than that. It is about mentoring a person through your experiences, knowledge, values, beliefs and your work ethic to help them achieve their own dreams. As a coach, you acquire a responsibility bigger than yourself, because the player decided to choose you among thousands of coaches in the world as his or her mentor. They decided to trust you with their dream. They decided that you are the best fit to guide them to success, and most importantly, they believe in you.

I believe the one key factor between a coach and a player’s relationship is to have both the same long-term goals defined. It is extremely important that we are both chasing the same dream from different ends. The beauty of this is that no matter how challenging, tough, hard, difficult or painful the situation ahead of us is, we will both give our absolute best to achieve our common dreams. We will definitely share many glorious times where we will win together, but more importantly, we will share the toughest moments where failure will try to crush our dreams. These moments in life are the ones that define you as a human being and being a coach gives you the privilege to prepare your players when they hit the hardest of times in life. Because of you they are now able to face those hard times with a “champion” mentality. You gain the responsibility of guiding them through life.”